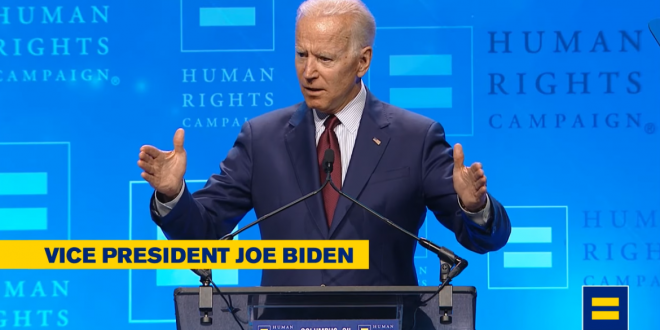 “You can get married because the Supreme Court now says that, but you can walk into your place of employment in so many states and be fired. It’s got to change, because of the values we have to demonstrate to the rest of the world. It’s got to change because it’s just morally wrong.”

The former vice president visibly enjoyed recalling the 2012 presidential campaign when he announced his support for same-sex marriage before his boss, President Barack Obama, had done so.

Biden recalled that most political observers “thought I had just committed this gigantic blunder.” He said he’d let Obama know beforehand what might be coming. “I told the president if asked, I was not going to be quiet.”

The rest of his remarks were less jovial, as Biden lamented the widespread discrimination that still exists in the U.S. and abroad. Noting recent killings of black transgender women, he roared: “It’s outrageous. It must, it must, it must end. The fastest way to end it is to end the Trump administration.”

Watch the speech, it’s something.