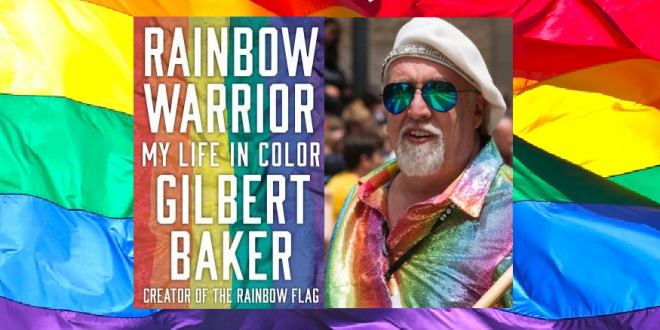 The bright, exuberant colors on the rainbow flag have long been a symbol of pride and unity for the LGBTQ+ community. From the beginning of its creation, artist Gilbert Baker simply wanted to capture the joyful liberation of sexual identity.

Little did he know, the flag would become an internationally recognized symbol that would fly above the streets in Gay Freedom Day parades and have its colors projected onto the White House after the landmark ruling legalizing same-sex marriage.

As the flag bearer of a historic revolution, Baker’s dedication to social justice activism has left an indelible mark in history—one that shines with the colors of the rainbow.

Rainbow Warrior: My Life in Color (Chicago Review Press; June 4, 2019) by Gilbert Baker follows the events surrounding the LGBTQ+ movement in his lifetime and the activism that redefined gender and power. Looking back at his life, Baker recounts his oppressive upbringing that condemned his love of fashion and his artistic pursuits. He describes his brief training to be an army medic at nineteen, which led him to San Francisco.

There, among a supportive LGBTQ+ community and its allies, Baker flourished as a designer, performer and as the creator of the rainbow flag. Through his partnership with Harvey Milk, Baker created a flag that represented “an active proclamation of power” for the San Francisco Gay Freedom Day parade in 1978.

As an openly gay man, Baker witnessed prejudice against the LGBTQ+ community throughout his life. To mitigate intolerance, he worked to provide inclusive spaces, like his drag shows with Sisters of Perpetual Indulgence, which celebrated individuality and self-expression. Furthermore, his work in flag-making and theater created hope during the troubling times of the AIDS crisis when many of Baker’s friends were diagnosed with the virus.

The drive to increase acceptance of sexual identities inspired his work, and Baker never shied away from opportunities to stand up against injustice. To this day, his flag continues to represent the need for inclusive spaces where diversity can flourish. Celebrating the life of Gilbert Baker and his iconic work in the community, Rainbow Warrior is an enthralling, intimate memoir following the enduring passion of the creator of the iconic rainbow flag.

The book began shipping today on Amazon and at Barnes & Noble. I got a review copy a couple of weeks ago and can recommend it to anybody interested in the history of the rainbow flag, or the most tumultuous years in recent LGBT history, or simply in Gilbert Baker’s imitable personality. Some of you may know that Gilbert, who passed away in 2017, was an longtime JMG lurker and sometimes sent us story tips.