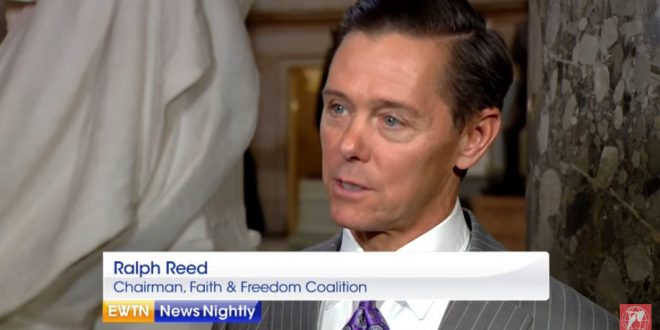 Anti-LGBT Christian Groups To Pump Tens Of Millions Into Trump 2020 Efforts, Reach Out To 100K Churches

Faith leaders and anti-abortion groups are ramping up their efforts to reelect President Trump, rewarding a president who has become an unlikely hero of the Christian right because of his commitment to socially conservative causes.

The Faith and Freedom Coalition (FFC) will spend tens of millions of dollars on a voter mobilization effort that aims to register 1 million Christians in key battleground states and reach 30 million people nationwide.

The group, which is led by conservative activist Ralph Reed, will pump literature into more than 100,000 churches across 18 states, primarily focusing on the presidential battlegrounds but also with an eye on contested House and Senate races.

Trump will speak at the FFC’s “Road To Majority” conference in Washington next week. Other anti-LGBT groups pumping millions into their Trump 2020 efforts include the Family Research Council and the Susan B. Anthony List.