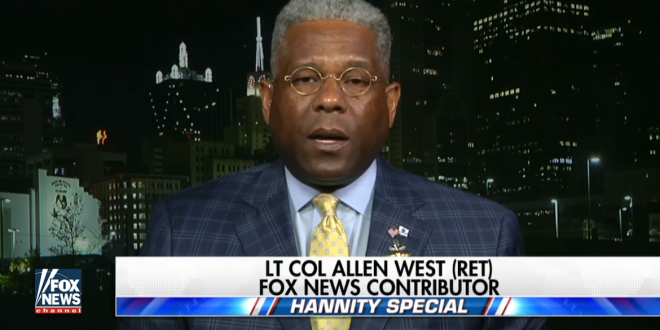 Allen West: God Told Me To Run For Congress Again

Former U.S. Rep. Allen West (R-FL) said on Monday that God has called on him to run for Congress again. West, who was disciplined in the military for conducting a mock execution on an Iraqi, became a conservative torchbearer while in Congress. During his tenure, he asserted that over 80 Democratic members were communists.

“I believe that you must fix your eyes firmly upon God,” he said. “So, here I am in Texas, where I came, not to seek any political office, however, there is a calling.” West said that he is considering running for three separate offices: the U.S. Senate, the U.S. Congress or the chairman of the Republican Party of Texas.

In 2003, West was court-martialed for allegedly torturing an Iraqi prisoner. In 2010 he was elected to his only term in the US House in that year’s Tea Party wave. In 2013 he began a stint as a Fox News contributor.

Now, many have wondered what my personal future shall be, and, my next steps politically. Here’s an announcement of sorts to assist with the answer. #MondayMorning #MondayMotivation #MondayThoughts #Announcement #tcot #Texas #election #election2020 https://t.co/GvnPjBS9Pm