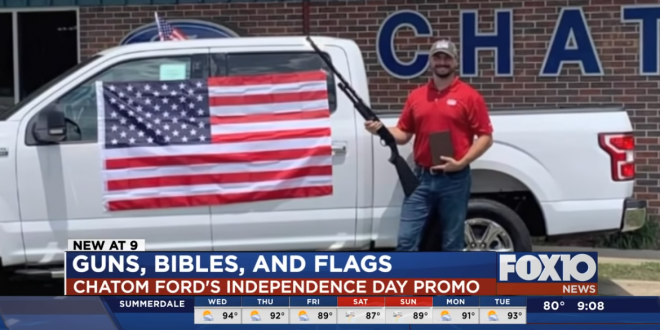 A car dealership in a rural Alabama town is tapping into some of the locals’ passions for a special Fourth of July promotion.

Chatom Ford, a dealership in Chatom, Alabama, is running a “God, Guns and Freedom” promotion that promises a Bible, a 12-gauge shotgun and an American flag to anyone who buys a car between the start of the promotion and July 31.

The dealership released a Facebook video that features Koby Palmer, a general sales manager, talking about the promotion. It’s been viewed nearly 14,000 times as of Tuesday night. “I guess it went viral, as the kids say,” Palmer, 29, told USA TODAY.

Anti-gun groups such as Newtown Action Alliance, a national grassroots group formed after the shooting at Sandy Hook Elementary School in Connecticut, urged the public not to support the promotion on Wednesday.

“Don’t buy your cars from Chatom Ford, a dealership in Chatom, Alabama! They are running a ‘God, Guns and Freedom’ promotion that promises a Bible, a 12-gauge shotgun & an American flag to anyone who buys a car between the start of the promotion & July 31,” the group tweeted.

And just like that, it’s over. Chatom Ford removed the Facebook video touting the promotion, which had blasted past 60,000 views in just a few days. A statement now reads, “Ford Motor Company has asked us to stop running the advertisement. They manufacture the products we are franchised to sell, so we are complying with their request.” The dealership says it “will fulfill all commitments we made to our customers.”