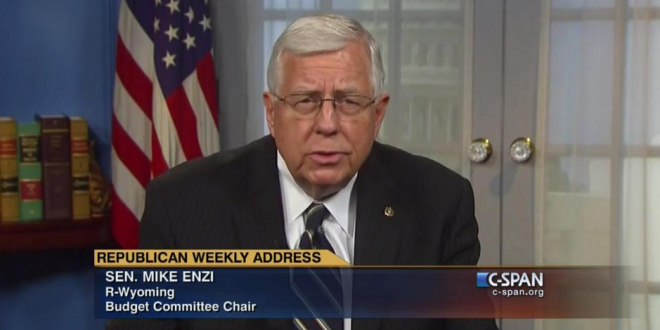 Wyoming Sen. Mike Enzi will not run for reelection next year, the four-term Republican senator said on Saturday. The 75-year-old Senate Budget Committee chairman announced his retirement in Gillette, Wyo., where he used to be mayor. The low-key Wyomingite said he wants to focus on budget reform.

He frequently ignores reporters to go about his day, which is likely focused on cutting spending and balancing the budget. He posts often about the “penny plan,” which would reduce spending by 1 percent each year. Enzi is term-limited from serving as budget chairman after next year.

Rep. Liz Cheney (R-Wyo.), who threatened Enzi with a primary challenge in 2014, praised him on Saturday for “fighting for a smaller, less obstructive, and more efficient federal government that would allow people to grow and thrive.” Her statement did not address whether she will run to succeed Enzi.

Sen. Liz Cheney. Get ready for that.

Enzi last appeared on JMG in 2017 when he declared that “any man who walks into a bar in a tutu deserves to be punched.” After a social media uproar, Enzi issued a seemingly sincere apology to the local man he had referenced.

Right wing pundit Erick Erickson, however, defended Enzi, effectively saying that anybody who defies “cultural norms” is worth punching. Erickson’s post included a link to a widely-debunked book which claims Matthew Shepard’s murder was not a hate crime.