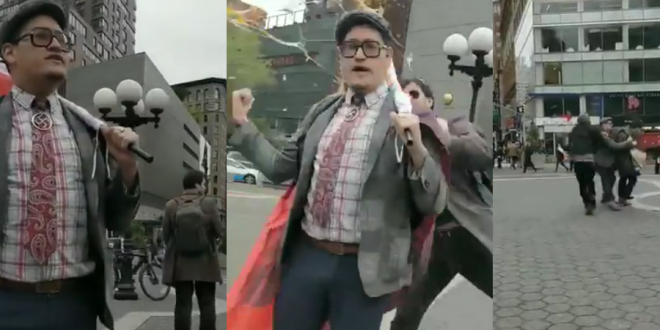 A right-wing activist who was wearing a swastika necklace in the middle of Union Square, Manhattan, has been pelted with eggs by a bystander.

The man wearing the swastika has been identified as 26-year-old Jovanni Valle, a renowned Trump supporter who has attended far-right and white nationalist rallies.

In the clip, which was shared on Twitter on Wednesday, Valle is wearing a suit and flat cap, with a large swastika medallion around his neck and carrying a large red flag, which is unidentifiable from the footage.

This is not the first time Valle has been attacked in public. Last July, whilst wearing a MAGA hat, he was hit with a glass and suffered facial injuries during a bar brawl on Manhattan’s Lower East Side. Valle told police his hat fell off while dancing.

A woman at the bar stamped on the hat and told Valle she hated what it stood for. He placed his hand on the woman, and her boyfriend then became involved, punching Valle. The woman hit him with a beer bottle, cutting his face. The couple were later arrested but released on bail.

Valle has attended and organized rallies alongside far-right activists and white nationalists. He spoke at the Washington, D.C., sequel to the Unite the Right white supremacist gathering in Charlottesville, Virginia, where a neo-Nazi murdered counter-demonstrator Heather Heyer in a vehicle attack. Valle has shared photos of himself alongside Augustus Invictus, a failed Florida candidate for Senate who rebranded himself as a voice for the “alt-right.”

The egging reportedly came after Valle declared that gay people are mentally ill due to a “chemical imbalance.”

Video of a Nazi getting EGGED bitch pic.twitter.com/Ddo5kRfVfo