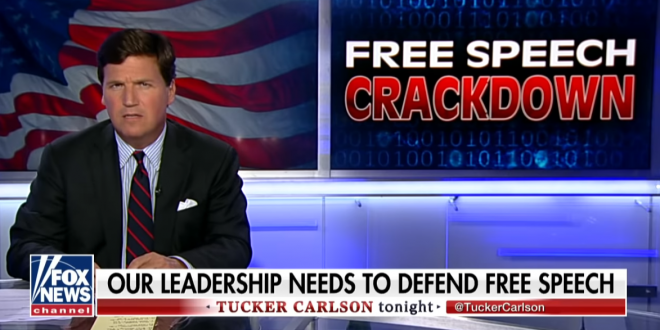 “Who knew fascism could be so chirpy? Groups that do things that are dangerous. What exactly does that mean? Dangerous like hurting other people? Or dangerous as in saying things that Mark Zuckerberg doesn’t like or considers bad for business? Well yesterday we found out. Facebook released its latest enemies list. Alex Jones, Milo Yiannopoulos, Paul Joseph Watson, Louis Farrakhan, Laura Loomer – all of them were designated dangerous individuals and banned from Facebook and from its subsidiary Instagram.

“What we’re watching now in real time is this country become unfree. So the question is who exactly is defending us in all of this? Us who might dissent from Mark Zuckerberg’s view or think that NBC News doesn’t tell the whole truth the whole time all the time? Or don’t trust Zuckerberg to control what we think. What about us? Who’s standing up for us? Where are our leaders in Congress? Where is the White House? Nowhere.

“As long as big tech isn’t hassling them personally and directly and their accounts remain open, they don’t seem to care. They’re fools. Will any of these people get re-elected in a country where left-wing tech companies control the terms of political debate? Can you really win a presidential election if Google opposes you? No. You can’t. Not a chance. Not right now. Without free speech there is no democracy. It’s time to stop lying about that.” – Tucker Carlson, on last night’s show.