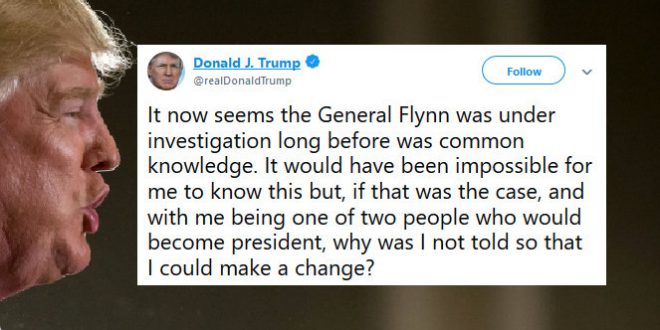 Trump: Why Wasn’t I Warned About Michael Flynn?

Here’s what has Trump backpedaling on Michael Flynn:

A federal judge on Thursday ordered the release of materials obtained during the course of Robert Mueller’s investigation which seems to point heavily at efforts by the Trump administration and its allies to obstruct justice in the case of admitted felon and former National Security Advisor Gen. Michael Flynn.

DC District Judge Emmet Sullivan approved the release of a transcript from a November 2017 voicemail left by one of President Donald Trump’s then-personal attorneys—John Dowd, the Washington Post reported—for Flynn’s attorney, Robert Kelner, in which Dowd reiterated the president’s “warm feelings” for his former advisor.

The message came just as Flynn was beginning to cooperate with Mueller’s investigation.

It now seems the General Flynn was under investigation long before was common knowledge. It would have been impossible for me to know this but, if that was the case, and with me being one of two people who would become president, why was I not told so that I could make a change?

THERE’S MORE Judge Sullivan demands that public gets to learn everything Trump’s lawyer John Dowd said in voice mail to Flynn’s lawyer. In his calls, Dowd appeared to suggest it wasn’t good idea for Flynn to cooperate, it would upset @realdonaldtrump
https://t.co/ZTDP8p0EvC

President Barack Obama warned you not to hire him. You did it anyways. https://t.co/pK92yuLLGR

The president is still live-tweeting his television.

Herridge: “There was no FBI brieefing warning the campaign of an open investigation into Flynn.”

Previous Fox Host: The Border Situation Is “Almost Like 9/11”
Next Christian TV Host: We Will “Push Out Zionism” And Impose Christian Values Whether You Like It Or Not