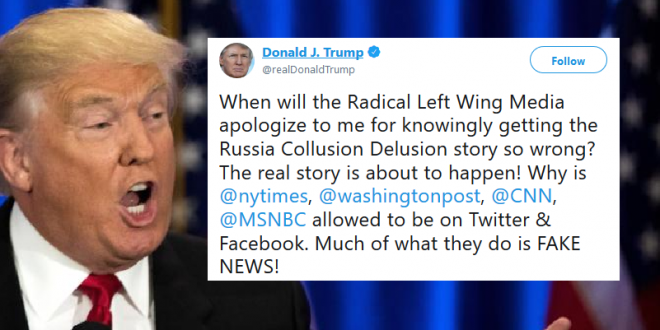 Donald Trump went on yet another wild retweet rampage Saturday morning. He also attacked the media, shared a tweet with an Islamophobic caption and promoted a Trump Organization-owned golf course.

Trump began the spree at 9 a.m. when he shared a video from far-right conspiracy-monger Alex Jones’ Infowars website, which itself has been banned or suspended from several social media platforms.

Trump’s final early-morning tweet was a rant against the “Radical Left Wing Media” regarding its coverage of special counsel Robert Mueller’s investigation into Russian interference in the 2016 election and possible Trump campaign collusion. He demanded an apology.

When will the Radical Left Wing Media apologize to me for knowingly getting the Russia Collusion Delusion story so wrong? The real story is about to happen! Why is @nytimes, @washingtonpost, @CNN, @MSNBC allowed to be on Twitter & Facebook. Much of what they do is FAKE NEWS!

Great being with the team at @TrumpGolfPhilly! Such an unbelievable course and property! This is truly one of #TomFazios greatest masterpieces! #TrumpGolf pic.twitter.com/bzxop2MeIH

Retweet: The ‘elite’ proclaim America must submit to Islam or else!!! #Trump2020 pic.twitter.com/SK91xliCUQ

So great to watch this! https://t.co/pYoiLjM0pz