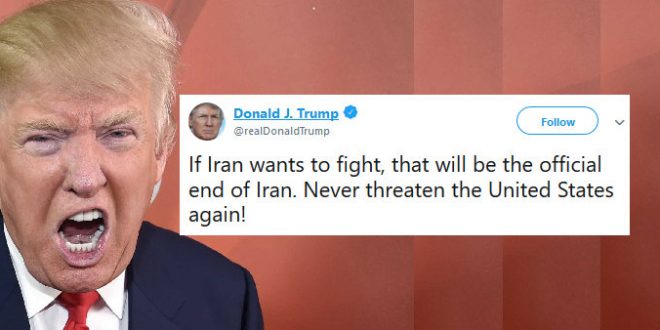 Trump Threatens To Destroy Iran: We Will “End” You

President Donald Trump took to Twitter to issue a threat against Iran amidst escalating tensions between the United States and the Middle Eastern country. The threat comes just days after the New York Times reported that Trump was seeking to tamp down escalated tensions between his administration and Tehran, telling acting Defense Secretary Patrick Shanahan he doesn’t want a war with the country.

If Iran wants to fight, that will be the official end of Iran. Never threaten the United States again!

Initiating catastrophic global violence is an effective way to pivot attention from the Mueller Report.

Previous Jeanine Pirro: The Deep State Is About To Be Exposed
Next CHATTER AWAY: Overnight Open Thread