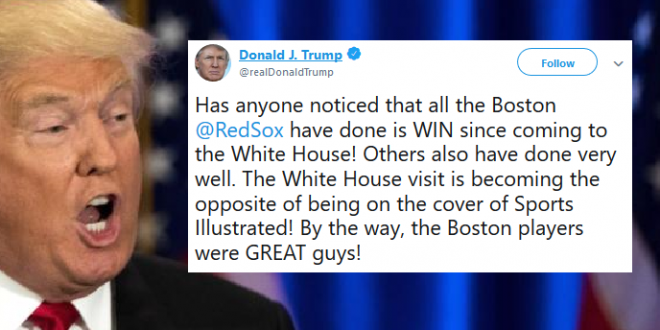 The Boston Red Sox are on a five-game winning streak and it seems President Donald Trump wants some of the credit. The Sox had won two in a row before visiting the White House last Thursday to celebrate their 2018 World Series Championship. They returned home to Fenway Park Friday and swept the Seattle Mariners over the weekend to increase the streak to five. Manager Alex Cora and several players, including last year’s AL MVP Mookie Betts, chose not to attend.

Has anyone noticed that all the Boston @RedSox have done is WIN since coming to the White House! Others also have done very well. The White House visit is becoming the opposite of being on the cover of Sports Illustrated! By the way, the Boston players were GREAT guys!

fun fact: our president has been divorced three times: from Ivana, from Marla and from reality

Touch the magical Trump, eat a fast food cheeseburger, and you too can be on the cover of the Wheaties box. Diet, exercise, and athleticism not required.