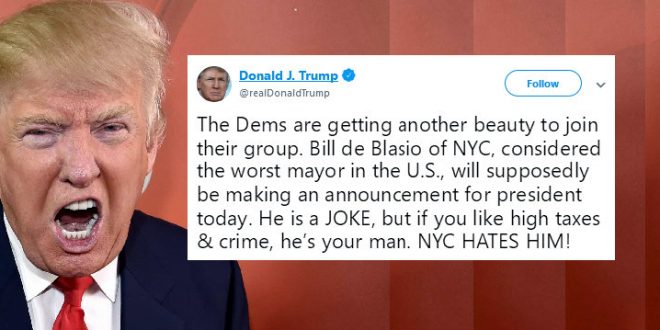 Never one to miss a chance to insult is political rivals, President Donald Trump piled on, mocking de Blasio by saying “Dems are getting another beauty” and saying “NYC HATES HIM!” in the Commander in Chief’s now signature ALL CAPS Twitter style when he REALLY wants to make a point.

In de Blasio’s announcement video, the NYC Mayor set a tone for defending working families and redistributing money from wealthy to a broader range of Americans. He also called out Trump, boasting that he’s “beaten him before” and promising to “beat him again.”

The Dems are getting another beauty to join their group. Bill de Blasio of NYC, considered the worst mayor in the U.S., will supposedly be making an announcement for president today. He is a JOKE, but if you like high taxes & crime, he’s your man. NYC HATES HIM!