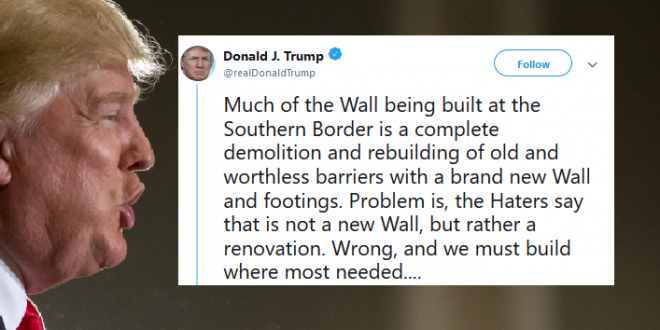 Trump Rages After Report On 1.7 Miles Of New Wall

U.S. Customs and Border Protection has put up just 1.7 miles of fencing with the US$1.57 billion that Congress appropriated last year for President Donald Trump’s wall along the Mexican border, a federal judge was told.

A lawyer for the U.S. House of Representatives provided the information Tuesday to the judge in Oakland, California, who is weighing requests from 20 state attorneys general and the the Sierra Club to block Trump from using funds not authorized by Congress to build the wall.

Much of the Wall being built at the Southern Border is a complete demolition and rebuilding of old and worthless barriers with a brand new Wall and footings. Problem is, the Haters say that is not a new Wall, but rather a renovation. Wrong, and we must build where most needed….

Also, tremendous work is being done on pure renovation – fixing existing Walls that are in bad condition and ineffective, and bringing them to a very high standard!