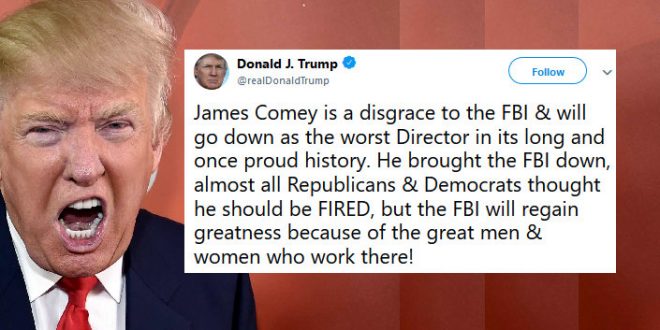 Former FBI Director James Comey said Thursday night on CNN that it appears President Donald Trump obstructed justice and that there is “no doubt” he would have been charged with crimes if he weren’t the sitting president, which shields him from prosecution.

Comey said he agrees with the more than 800 former federal prosecutors who said this week, in an open letter, that Trump would have faced felony charges if he weren’t the President.

Comey went even further, saying that the Justice Department, in a future administration, “will have to take a serious look at” charging Trump after he leaves office and isn’t protected from prosecution.

James Comey is a disgrace to the FBI & will go down as the worst Director in its long and once proud history. He brought the FBI down, almost all Republicans & Democrats thought he should be FIRED, but the FBI will regain greatness because of the great men & women who work there!

The President can’t be “someone who lies constantly,” he says. “I thought Republicans agreed with that. It’s one of the reasons I’m no longer a Republican.” #ComeyTownHall https://t.co/VTSLGm1Jq6 pic.twitter.com/ak5rfDmJZX

Anderson Cooper: “Do you think the Russians have leverage over President Trump?”

Former FBI Director James Comey: “I don’t know the answer to that.”

Cooper: “Do you think it’s possible?”