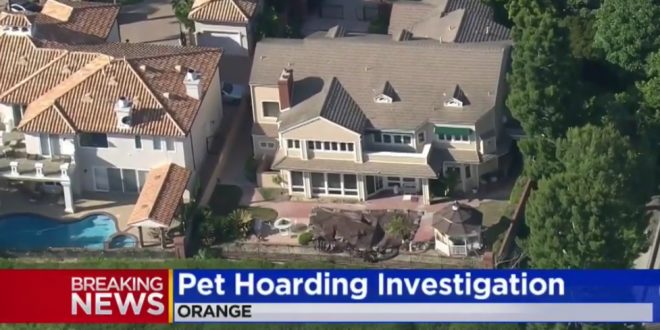 An investigation was underway Thursday after 136 dogs were found living in reportedly deplorable conditions in a multi million-dollar home in Orange County, California. Officers were called to the home in the 3800 block of East Woodbine Avenue around 2:20 p.m. They found dogs living in filthy conditions and began removing them one-by-one from the home, some of them covered in their own filth.

A helicopter flying over the home in a gated community saw Orange County Animal Care officials taking dozens of dogs out of the residence. There were so many dogs inside that the sad parade of the ragged animals took hours to complete. The homeowners, who have been living in the home with the dogs, were identified by neighbors as Jo and Ed Reitkopp. He’s a lawyer, and she’s an organizer for President Donald Trump.

So far the Trump cultist owners have only been charged with misdemeanor animal cruelty but officials say felony charges could come later. Ms. Reitkopp’s Twitter feed includes praise for the nutbag QAnon cult.

You are abusing, harassing & cyberbullying the President of the United States voted into office by nearly 63 million Americans. As former CIA Director, don’t u think u should respect that? Joe Biden will never measure up to POTUS in the eyes of the people! @realDonaldTrump @POTUS https://t.co/APoHdPAh3x

Previous WINNING: Car Stocks Crater $18B Because Trump
Next Biden +19 Over Bernie In New Poll, Harris Third At 8%