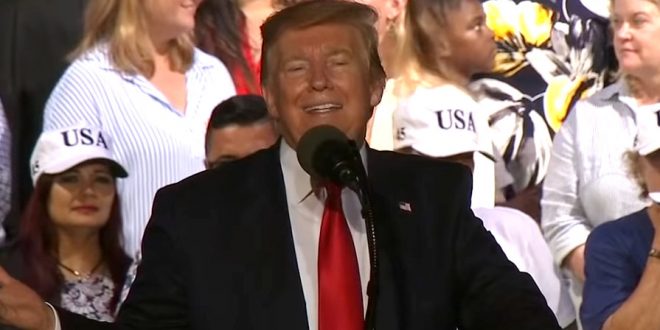 “You have hundreds and hundreds of [migrants] and you have two or three border security people that are brave and great — and don’t forget, we don’t let them and we can’t let them use weapons,” Trump said, in Panama City Beach.

“We can’t. Other countries do. We can’t, I would never do that. But how do you stop these people?” An audience member had an idea.

“Shoot them,” he yelled, which caused the president, and much of the televised backdrop of crowd members, to laugh. “Only in the panhandle can you get away with that statement,” Trump said, interpreting the call to violence as a joke.

The fans seated directly behind Trump wore serious, perturbed frowns, which were quickly replaced by broad grins after the shouted suggestion that the solution involved firearms. Uproarious laughter rippled across the room as audience members whistled and offered a round of applause.

To critics, Trump’s failure to outright condemn the idea of shooting migrants amounted to a “tacit endorsement” of the sentiment.

Many pointed out that such rhetoric was especially concerning in light of the fact that an armed militia group, the United Constitutional Patriots, had been searching the borderlands for undocumented migrants and detaining them against their will.

Trump asks Panama City rally “how do you stop” migrants from crossing the border.

“Shoot them!” a rally attendee says.

Trump: “Only in the panhandle can you get away with that statement” pic.twitter.com/kFKjzuMj0N

At a rally in Florida last night, President Trump joked after an attendee’s suggestion to “shoot” migrants at the border — and it reminded @johnberman of a moment from @VeepHBO.

“There is almost no discernible difference between the events,” he says. https://t.co/n36zyZeAwD pic.twitter.com/v5QGNDTKf6