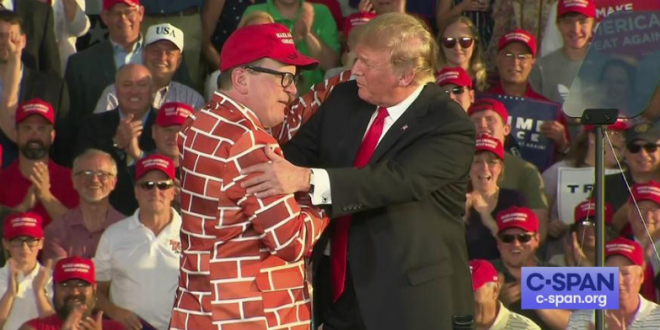 President Trump’s wall isn’t here — but it did come by for a visit on Monday. At a campaign rally in Montoursville, Pennsylvania, President Donald Trump spotted a man in the crowd dressed in a suit resembling a brick wall and invited him on stage.

“The wall is being built as we speak,” Trump told the crowd, referring the southern border wall, before pointing to the man in a brick wall suit, who was seen carrying a sign that read “Build Me.”

“Get him up here,” Trump said as rally-goers chanted: “Build the wall!” The man, who also wore a red “Make America Great Again” hat, briefly joined Trump on stage as the crowd roared in approval.

At his rally in Pennsylvania, @realDonaldTrump spots a big supporter of the border wall and calls him up to the stage to shake his hand.

Previous Ingraham: “Pope Pete” Is A Mild-Mannered Extremist Trying To Condescend His Way To The Nomination
Next First Full Trailer For Downton Abbey Movie Arrives