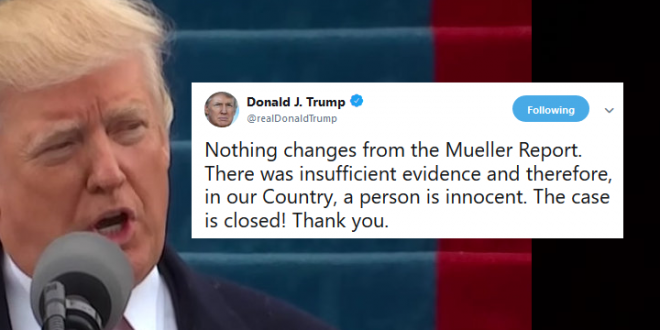 On the issue of obstruction of justice – which Mueller left open in his report – the former FBI Director said several times that no charges could have been brought against the President, because that is not allowed by the Department of Justice.

Mueller made clear that he does not want to testify before Congress about the investigation, saying the report should be considered his testimony. Democrats said the whole episode cries out for action by Congress.

“Congress should open an impeachment inquiry into the President’s potentially criminal acts,” said Rep. Don Beyer (D-VA). “Now it is time for Congress to do its job,” said Rep. David Cicilline (D-RI), who has also called for impeachment hearings. At the White House, President Trump had his own take.

Nothing changes from the Mueller Report. There was insufficient evidence and therefore, in our Country, a person is innocent. The case is closed! Thank you.