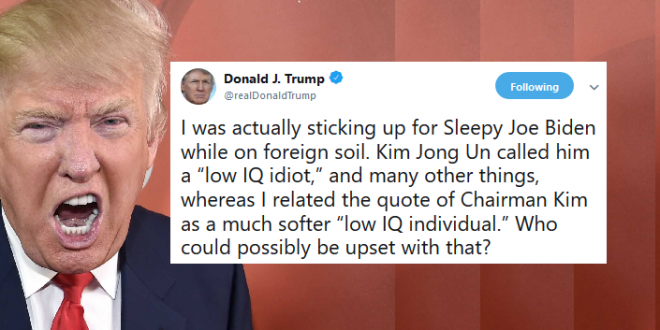 Trump: I Was “Sticking Up For Sleepy Joe Biden” When I Repeated Kim Jong-Un’s “Low IQ” Insult About Him

Just in from the Biden campaign:

The President’s comments are beneath the dignity of the office. To be on foreign soil, on Memorial Day, and to side repeatedly with a murderous dictator against a fellow American and former Vice President speaks for itself. And it’s part of a pattern of embracing autocrats at the expense of our institutions — whether taking Putin’s word at face value in Helsinki or exchanging ‘love letters’ with Kim Jong Un.

I was actually sticking up for Sleepy Joe Biden while on foreign soil. Kim Jong Un called him a “low IQ idiot,” and many other things, whereas I related the quote of Chairman Kim as a much softer “low IQ individual.” Who could possibly be upset with that?

North Korea fired off some small weapons, which disturbed some of my people, and others, but not me. I have confidence that Chairman Kim will keep his promise to me, & also smiled when he called Swampman Joe Biden a low IQ individual, & worse. Perhaps that’s sending me a signal?

Previous Christian Site: Obama’s “Home Country” Sends Gays To Prison, Which The US Doesn’t “Have The Guts To Do”
Next REPORT: Netanyahu Seeks Law Giving Him Immunity From Prosecution But Parliament May Dissolve First