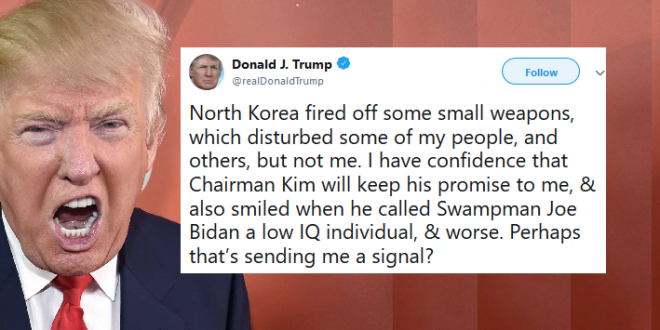 President Trump says he isn’t bothered by North Korea’s recent weapons testing, unlike some of his own “people,” because Kim Jong Un has already shown his loyalty by making a crack at Joe Biden.

Bizarrely, Trump made the comments not only just hours after his own national security adviser condemned North Korea for testing ballistic missiles, but also right before his scheduled meeting in Japan with Prime Minister Shinzo Abe, who also spoke out about the missile testing.

The country’s test of ballistic missiles earlier this month was seen as an aggressive escalation that violates United Nations Security Council resolutions, according to Trump’s national security adviser John Bolton.

North Korea fired off some small weapons, which disturbed some of my people, and others, but not me. I have confidence that Chairman Kim will keep his promise to me, & also smiled when he called Swampman Joe Bidan a low IQ individual, & worse. Perhaps that’s sending me a signal?

Trump has nicer things to say about Kim Jong Un, who murders his own people & imprisons political opponents than the last Vice President of the United States

Instead, it’ll be forgotten by tomorrow https://t.co/ftoUwQWAgv

The President of the United States praises a brutal, evil dictator for criticizing a fellow American.

Trump, in Tokyo to meet with PM Abe on security, stands by a murderous dictator whose weapons tests outrage the Japanese and also insults a former Vice President who Kim has verbally attacked last week…and spells Biden’s name wrong to boot. https://t.co/cdR4ttwE1F

Trump reports that he smiles when a brutal totalitarian dictator, with American blood on his hands, mocks the recent vice president of the United States. Who is and isn't loyal to this country? https://t.co/SY998VgjRQ

The President holds the authority to launch nearly 1500 strategic nuclear weapons at will. And Republicans will say nothing, because abortion and judges and socialism and "well, it's just how he talks," when they'd storm the White House if this was anyone else. https://t.co/8p2coZ71We

Hey @realDonaldTrump, in case you are confused, below are two facts.

You represent all Americans, remember? You should not be egging on a foreign power to criticize an American VP. Get it? https://t.co/EFxYyORTJV