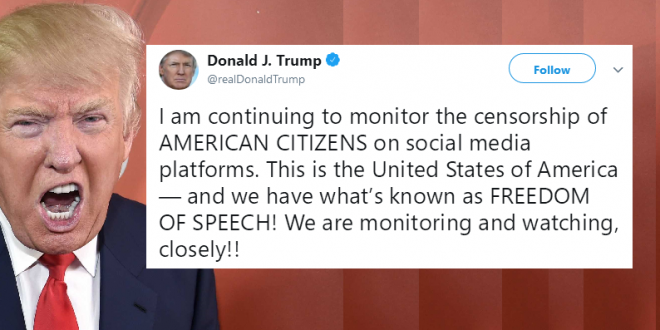 Glorious Leader is ending his week of 200+ tweets by raging about the latest crop of far-right extremists to be banned from various social media platforms. This whining comes hours after his eldest son made similar complaints.

As those of us who attended a fifth grade civics class know, freedom of speech doesn’t apply when it comes to private companies. Chalk this up as yet another one of Trump’s impotent bitches meant to rile up the “poorly educated” base he proclaims to love so much.

I am continuing to monitor the censorship of AMERICAN CITIZENS on social media platforms. This is the United States of America — and we have what’s known as FREEDOM OF SPEECH! We are monitoring and watching, closely!!

The wonderful Diamond and Silk have been treated so horribly by Facebook. They work so hard and what has been done to them is very sad – and we’re looking into. It’s getting worse and worse for Conservatives on social media!