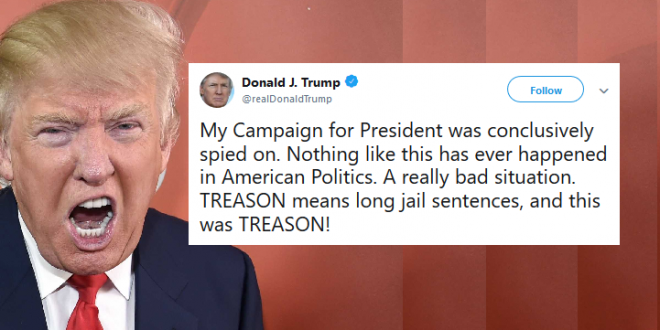 President Trump on Friday asserted that his 2016 campaign had been “conclusively spied on” by the Obama administration while calling the charge akin to “treason” and demanding jail time for those behind it. The president’s tweet comes days after Attorney General William Barr announced the appointment of a U.S. attorney to review the decisions that led to the establishment of an investigation into Trump’s campaign and Russian election interference.

CNN’s John Berman read the tweet and cued CNN Legal Analyst Jeffrey Toobin for immediate analysis. Toobin jumped right in and made clear that “treason is a crime for which death is a potential penalty!” He added, “It is so reckless and irresponsible to talk that way.”

He then noted how “this president has done has violated so many norms,” noted that this behavior is not illegal, but it is ” is really a grotesque abuse of power.” Toobin wrapped his assessment by adding “It’s gone on for so long now, that we’re kind of, oh, well, it’s just another tweet.”

My Campaign for President was conclusively spied on. Nothing like this has ever happened in American Politics. A really bad situation. TREASON means long jail sentences, and this was TREASON!

“What happened is that Donald Trump won. Down goes Comey.” @foxandfriends