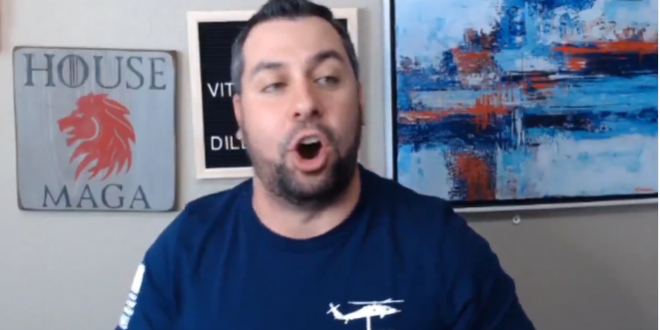 Trump Cultist Claims PA Rep. Brian Sims Is Secretly Straight And Should “Suck A Dick” To Prove He Isn’t

As some of you surely know, Pennsylvania state Rep. Brian Sims is currently embroiled in controversy after confronting anti-abortion activists outside a women’s health clinic.

The forced birth mob held a big rally in Philadelphia this afternoon where speakers called him a bully and demanded his resignation.

Meanwhile there’s “MAGA activist” Brenden Dilley, who bills himself this way: “author, speaker, life coach, personal trainer.” According to Dilley, the rumor in Pennsylvania’s “political circles” is that Sims is actually straight and is only pretending to be gay to get cred from the left.

“I don’t thinks he’s gay and I think we need to prove it. Here’s your homework: find me Sims’ girlfriend. This dude is not gay. I’m tellin’ you we should fuckin’ demand we see him suck a dick before we’ll believe he’s gay. You’re not gay, dude. Suck a dick. I don’t believe you. A gay guy would do it. Suck a dick. Go.”

MAGA activist Brenden Dilley insists that Pennsylvania state Rep. Brian Sims is not really gay and challenges him to “suck a dick” to prove otherwise. pic.twitter.com/qq6YLhAaJA

Previous London Mayor: PM Should Call Out Trump During State Visit, He’s Not In The Same Class As His Predecessors
Next White House Twice Asked McGahn To Publicly Deny Trump Obstructed Justice, McGahn Refused Each Time