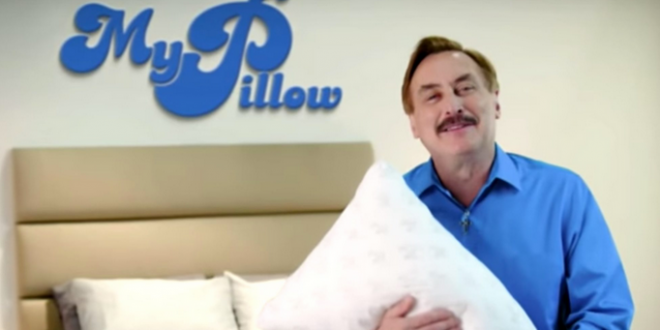 MyPillow is laying off about 150 workers at its Shakopee factories as the company’s CEO plans a new business venture, according to a statement from MyPillow CEO Mike Lindell. Lindell says the layout of the Shakopee facilities will be changing as he prepares to launch MyStore.com, which will be an “online store for entrepreneurs and inventors to sell their products.” Lindell says the impacted employees have been informed of other job opportunities outside of MyPillow.

“God answered our millions of prayers and gave us grace and a miracle happened on November 8, 2016. We were given a second chance and time granted to get our country back on track with our conservative values and getting people saved in Jesus’ name. As I stand before you today, I see the greatest president in history. Of course he is, he was chosen by God.” – MyPillow founder Mike Lindell,  speaking at CPAC 2019.

In November 2016 Lindell agreed to pay a penalty of $1 million after a group of California County Attorneys took legal action against the company, alleging deceptive advertising. A consumer watchdog organization said MyPillow’s website made unsubstantiated claims its products can cure snoring, migraines, fibromyalgia, and other health maladies.

At his June 2018 rally in Fargo, North Dakota, Trump performed on onstage infomercial for MyPillow, declaring, “He does make a great product, great pillows. I actually use them, believe it or not.”

Previous House Democrats Consider $25,000 Daily Personal Fine On Trump Administration Figures Who Defy Subpoenas
Next Ben Shapiro Gets Burned By BBC Host, Stalks Off After Ranting “I’m Popular And No One Has Heard Of You”