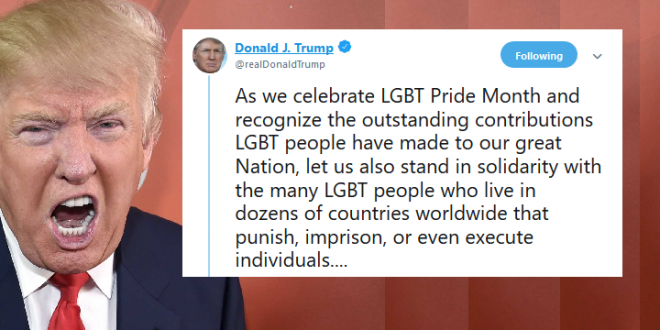 President Donald Trump on Friday recognized LGBTQ Pride Month — something he didn’t do during the first two years of his presidency.

Trump pointed to his administration’s efforts to decriminalize homosexuality worldwide that are being led by the U.S. Ambassador to Germany, Richard Grenell, who is gay. But when Trump was asked about that effort shortly after its roll out in February, he said, “I don’t know.”

In the two and a half years since Trump was inaugurated, he has taken steps to curtail LGBTQ rights, from nominating judges aligned with anti-gay hate groups to banning transgender people from the military.

The hypocrisy, as always, is stunning.

Thank you Mr President! There are millions of us gays who love and support you! You’re our guy!

Nice Tweet. Now, how about telling Mitch McConnell to bring up the Equality Act?

Previous Fox News Host: Republicans Who Don’t Like Trump’s Tariffs On Mexico “Should Go Jump Off A Cliff” [VIDEO]
Next Elton John Is “Ashamed” About Brexit: I’m A European, Not A Stupid, Colonial, Imperialist English Idiot [VIDEO]