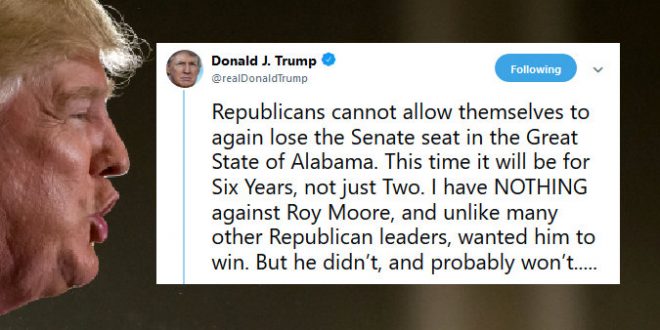 Trump And Junior Tell Roy Moore Not To Run: Call It Off Now If You “Care About MAGA More Than Your Ego”

In a heated exchange on Twitter Tuesday, Donald Trump Jr., son of the President of the United States, went after controversial former Alabama Chief Justice Roy Moore, advising him not to run as a 2020 U.S. Senate candidate after his loss to Democrat Doug Jones in 2017.

While Moore has expressed interest in a 2020 run, he has not yet announced one. After 2020 U.S. Senate candidate and Rep. Bradley Byrne (R-Fairhope) tweeted that he welcomed Moore to the race, Moore tweeted asking what Byrne was so worried about.

What is Bradley so worried about? https://t.co/G0kgj4caIP

You mean like last time? You’re literally the only candidate who could lose a GOP seat in pro-Trump, pro-USA ALABAMA. Running for office should never become a business model. If you actually care about #MAGA more than your own ego, it’s time to ride off into the sunset, Judge. https://t.co/Twg9isFRkY

Republicans cannot allow themselves to again lose the Senate seat in the Great State of Alabama. This time it will be for Six Years, not just Two. I have NOTHING against Roy Moore, and unlike many other Republican leaders, wanted him to win. But he didn’t, and probably won’t…..

…If Alabama does not elect a Republican to the Senate in 2020, many of the incredible gains that we have made during my Presidency may be lost, including our Pro-Life victories. Roy Moore cannot win, and the consequences will be devastating….Judges and Supreme Court Justices!

President has “NOTHING” against Roy Moore, who has been accused of sexually assaulting teenage girls when he was in his 30s https://t.co/U0nTxQJIvt

Previous MICHIGAN: Amash Gets Standing Ovation, Accuses Pelosi Of Dragging Her Feet On Impeachment [VIDEO]
Next BRITAIN: Boris Johnson Ordered To Court Over Claims He Lied About UK Paying £350 Million Weekly To EU