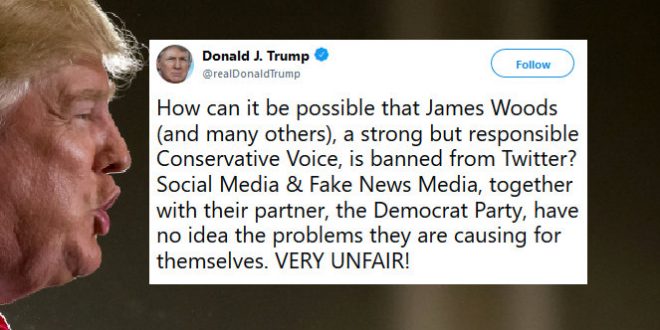 President Donald Trump criticized social media companies after Facebook banned a number of extremist figures, declaring that he was “monitoring and watching, closely!!” James Woods, one of Hollywood’s most outspoken conservatives, has had his Twitter account locked.

Twitter spokeswoman Katie Rosborough said Woods will need to delete a tweet that violated Twitter rules before he can be reinstated. NBC reporter Ben Collins reported that Woods remains locked out of his account because he won’t delete a tweet that references hanging.

How can it be possible that James Woods (and many others), a strong but responsible Conservative Voice, is banned from Twitter? Social Media & Fake News Media, together with their partner, the Democrat Party, have no idea the problems they are causing for themselves. VERY UNFAIR!

The tweet in question had the hashtag #HangThemAll in it, by the way. https://t.co/mc3FJpAGNl

Twitter pretends like it’s hard to get rid of James Woods, but it’s not. Look how easy it was for Hollywood to do it.

first they came for James Woods, and I did not speak out— because seriously, fuck that guy

Guess this is why I missed all the James Woods drama, huh? What a sad little man to have blocked me. pic.twitter.com/31r6qG78fX

James Woods blocked me for pointing out that soliciting teen girls to go to Vegas with him is felony solicitation of minors. pic.twitter.com/15fSa8l25T

FYI James Woods’ Twitter account hasn’t been banned or suspended. It’s still there. He probably just refuses to delete the tweet where he called for the hanging of his political opponents.