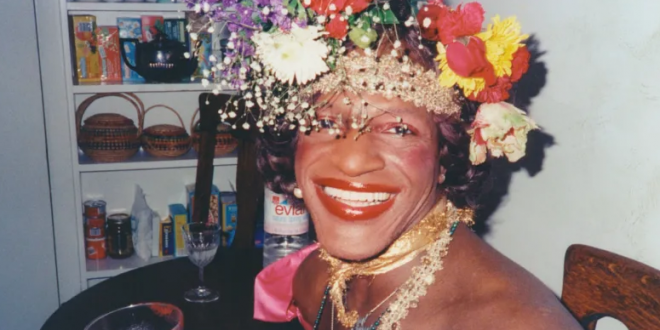 Marsha P. Johnson [screenshot above] and Sylvia Rivera, pioneering transgender activists who were at the vanguard of the gay rights movement, will be immortalized in a monument that may be placed down the street from the Stonewall Inn, the city said on Wednesday.

Ms. Johnson and Ms. Rivera were both drag performers and vibrant characters in Greenwich Village street life who worked on behalf of homeless L.G.B.T.Q. youth and those affected by H.I.V./AIDS. They are also believed to have been key figures in the June 1969 Stonewall Uprising who fought police as they raided the gay bar on Christopher Street.

The planned monument will be publicly announced on Thursday in commemoration of the 50th anniversary of the uprising, which was a seminal moment for gay rights.

When trans young people trying to find their place in the world come to the Village, they’ll look up at a monument to Marsha P. Johnson and Sylvia Rivera.

They’ll see themselves, and their own potential to make history. https://t.co/Yj1vn7VN4v

Sylvia Rivera and Marsha P. Johnson will be commemorated by a monument in Greenwich Village nearby the Stonewall Inn bar, which was raided by police in the early hours of June 28, 1969 https://t.co/3WJneYLYxF

Ahead of #Stonewall50, the city of New York has announced that it will honoring two of Stonewall’s key players, Marsha P. Johnson and Sylvia Rivera, in the form of permanent monuments. These monuments are proposed for the Ruth Wittenberg Triangle near where the Riots took place. pic.twitter.com/CzJDdIUzJx