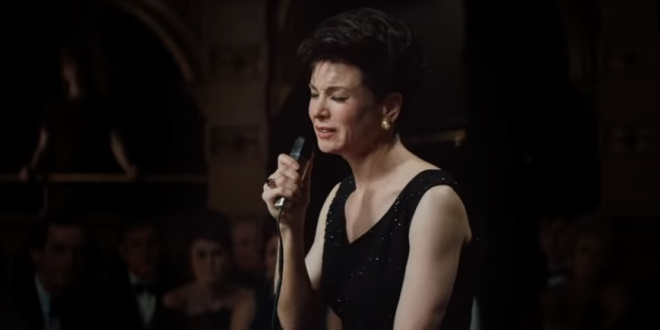 A star is reborn in the first trailer for Renée Zellweger’s Judy Garland biopic. The Oscar-winning actress brings the late Hollywood icon to life in the first official preview of theater director Rupert Goold’s upcoming chronicle adapted from Peter Quilter’s musical End of the Rainbow.

In her first leading role in a movie since 2016’s Bridget Jones’s Baby, Zellweger portrays Garland one year before before her death from an accidental drug overdose at age 47, as the Wizard of Oz star arrives in London to front a series of sold-out concerts at the Talk of the Town nightclub between 1968 and 1969.

UNRELATED: I just got the April monthly recap from PayPal, so in the morning I’ll send out thank you notes to those that hit the JMG tip jar on our 15th anniversary a couple of weeks ago. As I’ve mentioned, I don’t get email addresses for those that don’t use their own PayPal account, so hairy bear hugs to all of you!

Previous Ben Shapiro Gets Burned By BBC Host, Stalks Off After Ranting “I’m Popular And No One Has Heard Of You”
Next Party City To Shutter 45 Stores Due To Helium Shortage