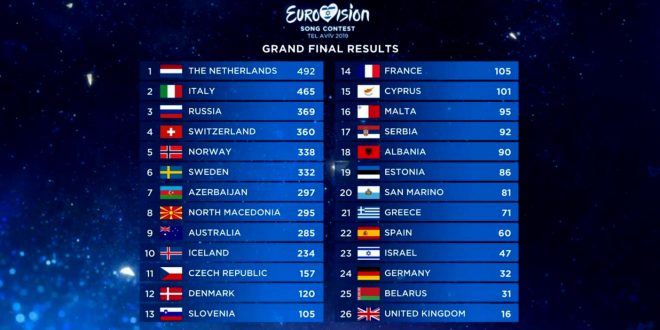 Duncan Laurence propelled the Netherlands to Eurovision 2019 victory after a triumph in Tel Aviv on Saturday night. The Dutch singer lifted the trophy up high in Israel after topping the table with 492 points and beamed as he received the microphone from last year’s winner Netta.

Madonna wowed the audience with a two-song performance during the half-time interval while the votes were cast and counted, having previously defended her decision to perform at the show. The 60-year-old headlined Saturday night’s singing spectacular with her 1989 hit Like A Prayer and her latest single Future.

Also gracing the stage were past Eurovision favourites including Conchita Wurst and Verda Serduchka who took part in a mash-up of songs from previous years, some of which won.

In her much-anticipated and politically contentious performance at Eurovision in Israel, Madonna made an apparent call for peace in the region. As she and guest star Quavo sang the lyrics “Not everyone is coming to the future / Not everyone is learning from the past”, a pair of her dancers – one wearing a costume bearing a Palestinian flag, another with an Israeli flag – embraced as they climbed a set of stairs at the climax of the performance.

Earlier, in an interstitial portion of the performance between the songs Like a Prayer and Future, she spoke to figures wearing gas masks, asking: “They are so naive – they think we are not aware of their crimes. We know, but we’re just not ready to act. The storm isn’t in the air, it’s inside of us. I want to tell you about love and loneliness. But it’s getting late now. Can’t you hear outside of your Supreme hoodie, the wind that’s beginning to howl?”

Iceland use #Eurovision Song Contest to protest against the Israeli occupation of Palestinian territories https://t.co/0vNAndl6dY

Iceland use #Eurovision Song Contest to protest against the Israeli occupation of Palestinian territories https://t.co/0vNAndl6dY

“Let’s never underestimate the power of music to bring people together” – @Madonna, at the Grand Final of the Eurovision Song Contest 2019.#DareToDream #Eurovision pic.twitter.com/18RF5r0Kq3

🇳🇱 The winner of the Eurovision Song Contest 2019 is Duncan Laurence, representing The Netherlands with his song, Arcade!

A Palestine flag on the back of one of Madonna’s dancers in Israel. She’s always controversial but Wow! #Madonna #Eurovision #Palestine pic.twitter.com/FhkebGdH8d

Y’all can come for her for the #LOLs all you want but Madonna, the biggest female artist of all time, just utilised the biggest TV audience available to promote unity between Israel and Palestine during one of the most controversial #Eurovision pic.twitter.com/ZNN1Xr7U70