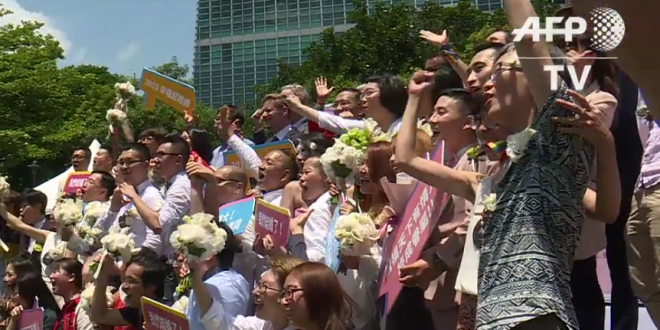 More than 360 same-sex couples tied the knot in emotional scenes in Taiwan on Friday, the first legal marriages in Asia hailed by activists as a social revolution for the region. The government data was released after Taiwan’s parliament passed a bill last week that endorsed same-sex marriage, although the measure could complicate President Tsai Ing-wen’s bid for re-election next year.

Twenty couples queued at a marriage registration office Friday in downtown Taipei, where rainbow flags were on display alongside stacks of government-issued, rainbow-themed registration forms. “I feel very lucky that I can say this out loud to everyone: I am gay and I am getting married,” said Shane Lin, a 31-year-old baker who with his partner were the first couple to register in the Taipei office.

“History in Taiwan. Same sex marriage is now legal. Shane Lin and Yuan Shan-Ming become one of the first couples to marry this morning in Taipei.”

Taiwan is the first country in Asia to legalize same-sex marriage, and the first official weddings are underway 🏳️‍🌈 pic.twitter.com/EwiidQV48l

“I feel very lucky that I can say this out loud to everyone: I am gay and I am getting married.”

Shane Lin, one of the first people to marry his same-sex partner today in Taiwan, on the first day it became legalhttps://t.co/d3TgVQOs6o pic.twitter.com/hZHjeJHYtE

Couples walk down the rainbow aisle, and hold up signs that literally said “We got married.” pic.twitter.com/v46lmOiQ0p

Previous BREAKING: Theresa May To Resign On June 7 [VIDEO]
Next Alabama Bill To End Marriage Licenses On Gov’s Desk