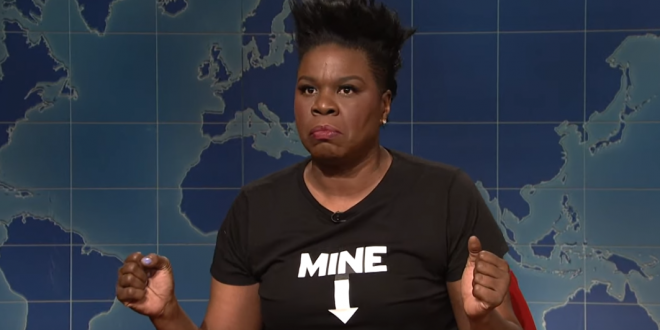 Leslie Jones joined “Weekend Update” co-anchor Colin Jost on the Saturday Night Live season 44 finale over the weekend, decked out in the red robes worn by the women in The Handmaid’s Tale.

Jones soon ripped off the robes to reveal her bold, defiant black T-shirt with the word “Mine” written across the front, above a white arrow pointed downward, which she wore with an imposing and brilliantly intimidating grace.

After calling out the 25 white Alabama state senators who voted to pass the legislation — saying their photos look like “the mug shots of everyone arrested at a massage parlor” — she delivered a pointed and passionate message slamming the laws and what they mean.

Previous JMG Back Online: Thanks Very Much For Your Patience
Next The Netherlands Win Eurovision 2019, Madonna And Iceland Send Messages About Israel/Palestine [VIDEO]