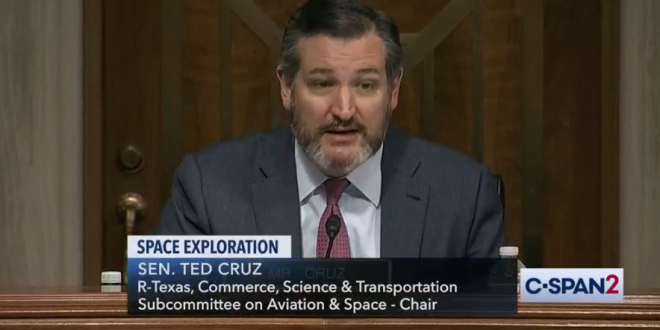 Ted Cruz has a Twitter problem. According to the Texas senator, his Twitter moments are filled with leftists making fun of him. As proof of his claim, Cruz included the Twitter moment centered around his comments during a Congressional hearing this week.

During that hearing, Cruz suggested a space force is needed to defend the country against “pirates.”

Yet, it is unclear how the senator somehow did not see that one coming. The point of the senator’s tweet, though, was likely to point out Twitter’s alleged bias against conservatives, something Cruz has made a key policy issue.

Hey @jack how come Twitter’s “moment” quotes all the snarky leftists making fun of my comments, but doesn’t include my tweets in response explaining the real point that NATIONS like China have already developed & tested weapons to destroy satellites? https://t.co/dwkM5ndXj3

Senator Ted Cruz thinks those of us concerned about climate change are alarmist, but he’s adamant that the nation invest in protection against space pirates https://t.co/aq1VL1kHhs

Hey @jack, I toured Twitter HQ & didn’t see a snarky leftist dept. Where you hiding the millions of employees you must need to monitor all Republicans just so you can mess them up?

Also, are you scared of space pirates like Sen Cruz? And can you give this post lots of retweets? https://t.co/4juntAILma

You guys should have led with that. https://t.co/LasbVX8GRS