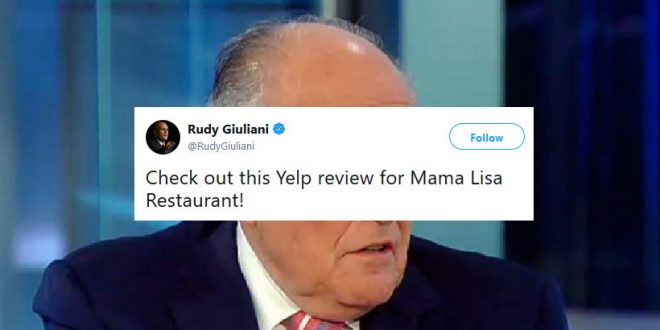 President Donald Trump‘s lawyer Rudy Giuliani sent a bizarre late-night tweet Friday night asking people to check out a restaurant’s Yelp review. “Check out this Yelp review for Mama Lisa Restaurant!” Giuliani wrote. He did not include a link. As usual, Twitter had some thoughts. Giuliani’s “drunk Pelosi” video tweet has since been deleted. Giuliani’s “ivesssapology” and Mama Lisa posts remain online as of early Saturday.

Back in December, you may recall, Giuliani accused Twitter of sabotaging his tweet after he inadvertently created a hyperlink to a previously unused domain which somebody immediately snapped up to post an anti-Trump message. Those tweets are at the bottom.

Check out this Yelp review for Mama Lisa Restaurant!

Most expensive free lawyer ever

Perhaps you know a 13 year-old who can help you with your computer machine and the interwebs?

Is Lisa your cousin?

Twitter allowed someone to invade my text with a disgusting anti-President message. The same thing-period no space-occurred later and it didn’t happen. Don’t tell me they are not committed cardcarrying anti-Trumpers. Time Magazine also may fit that description. FAIRNESS PLEASE