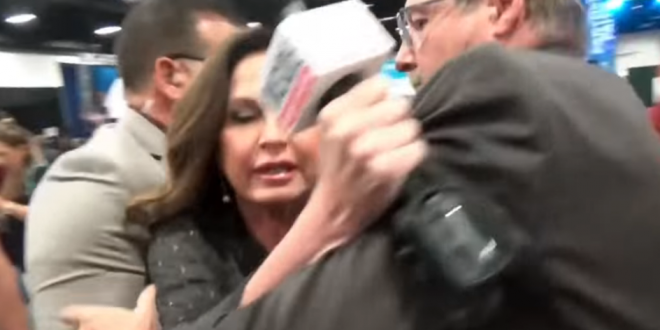 Pastor Jesse Duplantis zips around in a Dassault Falcon 50 jet paid for by his church. Inside Edition found him boarding his plane with his wife for a short one-hour flight from Fort Worth, Texas, to his home outside New Orleans. When he did not respond to Inside Edition’s requests for an interview, Chief Investigative Correspondent Lisa Guerrero met him at a book signing.

“Hi, I’m from Inside Edition, I’d love for you to set the record straight, sir, why do you need a $54 million jet?” she asked. “We’re not doing any kind of interviews now, I’m in a book signing,” he said. Guerrero was then whisked away by security officials,

The next day on the pulpit, he joked about security pushing Guerrero away, telling his adoring audience, “She’s gone, I heard her holler. I came back and said, ‘What did you do with her?’ He [the security guard] said, ‘I made her “Outside Edition.”‘”

Kenneth Copeland is famous for saying he needs a private jet in order to avoid flying like everyone else in a “long tube with a bunch of demons.” When Guerrero asked him if he really thought other humans were demons, Copeland pretended he never said the thing we all heard him say.

“No I do not and don’t you ever say I did,” Copeland responded. Copeland said the jet is important to his ministry. “If I flew commercial, I’d have to stop 65% of what I’m doing.”

“How much did you pay for Tyler Perry’s Gulfsteam jet for example?” Guerrero countered. “Well, for example, that’s really none of your business,” he replied. “Isn’t it the business of your donors?” she asked. “Listen, he made that airplane so cheap for me, I couldn’t help but buy it,” Copeland said.

Watch every second of this clip.

Previous US Official: Mike Pence To Offer “Carrots” To Venezuela Military In Attempt To Spawn Uprising Against Maduro
Next White House Claims Trump Was Only Joking About Two Extra Years To Replace Those “Stolen” By Mueller Probe