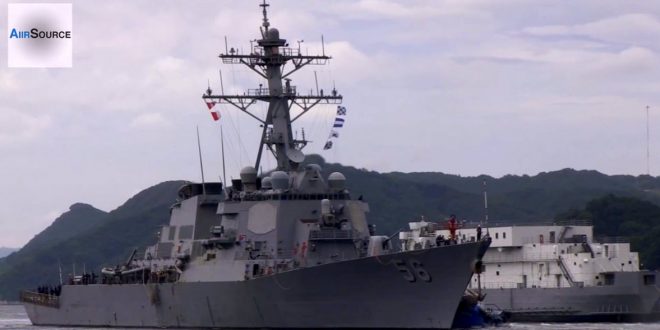 The White House wanted the U.S. Navy to keep a warship named for the late Sen. John McCain out of President Donald Trump’s view during his trip to Japan, three U.S. officials said Wednesday.

A U.S. Indo-Pacific Command official wrote an email to Navy and Air Force officials about Trump’s arrival in Japan over Memorial Day weekend. It included instructions for the proper landing areas for helicopters and preparations for the USS Wasp, the ship on which the president was to speak.

The official then issued a third instruction: “USS John McCain needs to be out of sight,” according to the email, which was obtained by the Journal and whose existence was confirmed to The Associated Press. Sailors on the USS John S. McCain, who usually wear hats with the ship’s name on it, were given the day off when Trump visited.

I was not informed about anything having to do with the Navy Ship USS John S. McCain during my recent visit to Japan. Nevertheless, @FLOTUS and I loved being with our great Military Men and Women – what a spectacular job they do!

Trump is a child who will always be deeply threatened by the greatness of my dads incredible life. There is a lot of criticism of how much I speak about my dad, but nine months since he passed, Trump won’t let him RIP. So I have to stand up for him.

It makes my grief unbearable. https://t.co/gUbFAla1VE

CBS’s David Martin confirms @WSJ report of a WH request to move the USS John McCain out of sight during @POTUS visit to Yokosuka Naval Base on Tuesday due to his antipaty to the late Senator. @POTUS last night denied knowledge of a any WH bid to keep the McCain out of sight.

Two sources confirm to @CNBC that this is the email showing coordinated efforts to put the USS John McCain “out of sight.”

The Pentagon maintains that Acting Secretary of Defense Pat Shanahan was unaware of such plans. (H/T @RyanRuggiero) pic.twitter.com/adaZKtp1oE

The name of USS John S. McCain was not obscured during the POTUS visit to Yokosuka on Memorial Day. The Navy is proud of that ship, its crew, its namesake and its heritage.