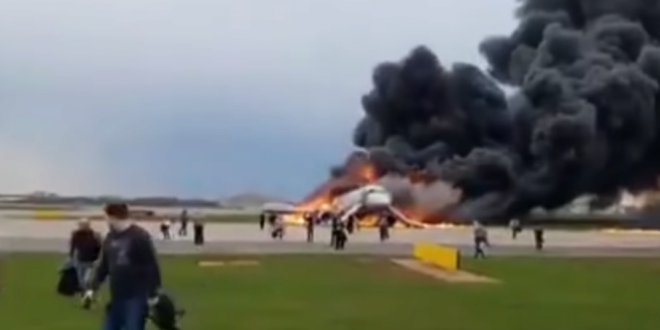 After the plane skidded to a stop on Sunday at Sheremetyevo International Airport, Russian news media reported that some passengers had insisted on grabbing their carry-on bags before leaving the burning wreckage — a violation of basic emergency protocol that would have slowed the evacuation. Videos posted online showed people walking away from the jet with luggage.

Kommersant FM reported that some passengers had slowed the evacuation by insisting on retrieving their hand luggage from overhead compartments, even as those behind them clamored to exit the burning plane. As passengers groped for baggage, a lethal bottleneck formed in the plane’s single aisle. In training, Aeroflot flight attendants are taught to evacuate a plane by yelling repeatedly at passengers, at the top of their lungs, to leave hand luggage behind.

BREAKING: Panicked passengers rushing to evacuate a burning Aeroflot plane at Moscow’s Sheremetyevo Airport after the Sukhoi Superjet-100 made a mind-blowing fiery crash-landing from the second attempt. Injuries reported. Video Via @bazabazon pic.twitter.com/Fa5UAUEHop

At least 41 people, including two children, were killed on a Russian Aeroflot plane when it caught fire midair on Sunday. pic.twitter.com/nQLlg1fruh