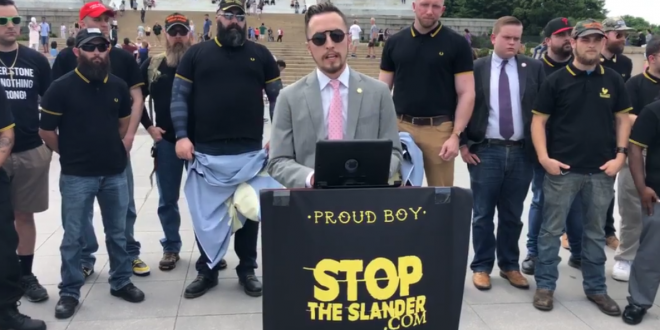 Members and leadership of right-wing organization “The Proud Boys” assembled Monday afternoon in front of the Lincoln Memorial to hold a press conference announcing a lawsuit against the Southern Poverty Law Center (SPLC).

“The SPLC is the glue holding together all the media’s lies about us,” said Enrique Tarrio. The group argued that they are wrongly identified and are suing for slander.

This action comes separately from Proud Boys founder Gavin McInnes’s lawsuit against the SPLC for slander. McInnes has since disavowed the Proud Boys, saying he was done with the group “forever.”

Roughly two dozen Proud Boys are at the Lincoln Memorial to announce something. The website on their banner redirects to a site where you can buy awareness bracelets for as much as $5,000. pic.twitter.com/u8FVWlW6VG

The Proud Boys announce that, like founder Gavin McInnes, they’re suing the Southern Poverty Law Center. No word on what the gorilla on their banner represents. pic.twitter.com/HGmNQdIVFz

One Proud Boys leader says the group “likes to sometimes cause shenanigans.” pic.twitter.com/j5qKEByliu

The Proud Boys leader says the gorilla on their banner is “a dedication to Harambe.” pic.twitter.com/qfgAvIzrEZ

So, the Proud Boys have a Telegram channel for mass reporting Twitter accounts they want to see banned.

And an administrator just accidentally posted a bathroom selfie in a Fred Perry shirt and wrote, “Sorry! Wrong chat.”

You can’t make this stuff up. pic.twitter.com/mvEpLLhMQQ

This is how far-right groups like Proud Boys manipulate @TwitterSupport terms of service. Seems like a gaping loophole that permanently banned accounts can still manipulate the platform with inauthentic behavior and mass report weaponization. pic.twitter.com/0GaJkc9Sx1