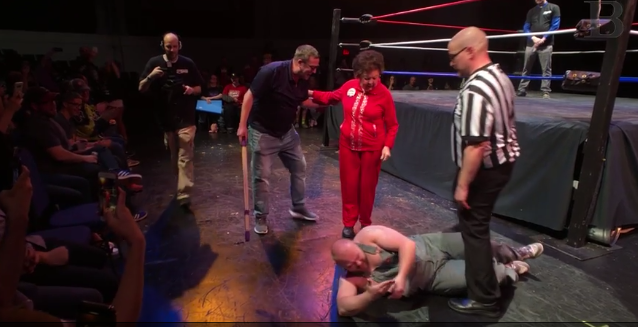 Tongues-speaking political gadfly and self-proclaimed “prophetess” Opal Covey has run for mayor of Toledo, Ohio six times. And every time she loses she then declares that God will destroy the city because of voter fraud.

Last night Covey, for reasons that remain unclear, made her pro wrestling debut against some overalls-clad bubba named Pain Train.

As you’ll see in the clip below, Covey takes the microphone for several minutes of indecipherable rambling before being led over to Pain Train, who is already face down on the floor outside the ring after taking a wooden pole to his skull, courtesy of an unnamed assailant.

Covey then scuttles over to Pain Train, where she pretend kicks him and gingerly places one foot upon his back. She is then declared the winner before chasing Pain Train out of the venue. That bit starts at around 7:00. It’s what Jesus would want.