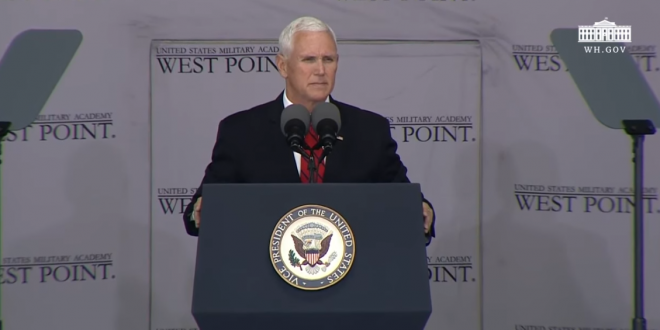 Pence To West Point Cadets: Expect To Go To War

Vice President Mike Pence told the most diverse graduating class in the history of the U.S. Military Academy on Saturday that the world is “a dangerous place” and they should expect to see combat. “Some of you will join the fight against radical Islamic terrorists in Afghanistan and Iraq,” he said.

“It is a virtual certainty that you will fight on a battlefield for America at some point in your life,” Pence said. “You will lead soldiers in combat. It will happen. Some of you may even be called upon to serve in this hemisphere.”

Pence spoke as the U.S. plans to send another 1,500 troops to the Middle East to counter what the Trump administration describes as threats from Iran; as the longest war in U.S. history churns on in Afghanistan; and as Washington considers its options amid political upheaval in Venezuela.