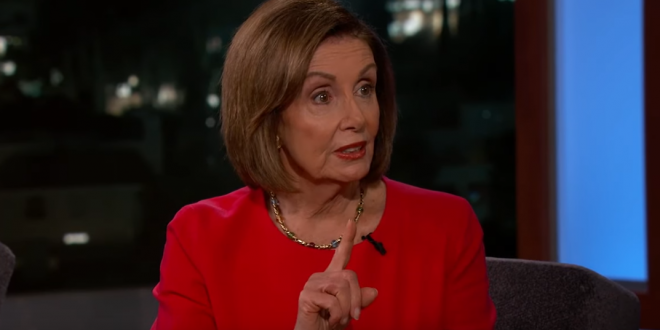 Pelosi To Kimmel: Trump “Wants Us To Impeach Him”

House Speaker Nancy Pelosi said Thursday night on “Jimmy Kimmel Live” that President Donald Trump actually wants to be impeached because he believes the Republican-controlled Senate would bail him out.

“I think the president wants us to impeach him,” the California Democrat told Jimmy Kimmel. “He knows it’s not a good idea to be impeached, but the silver lining for him is then, he believes, that he would be exonerated by the United States Senate.

“And,” Pelosi continued, “there is a school of thought that says, ‘If the Senate acquits you, why bring charges against him in the private sector when he’s no longer president?’ So when we go through with our case, it’s got to be ironclad. Ironclad.”