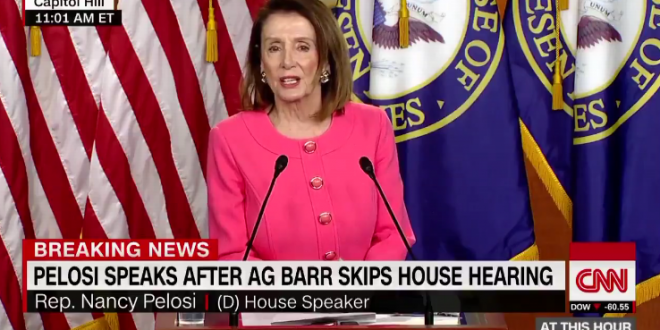 During a closed-door meeting on Thursday, Speaker Nancy Pelosi accused Attorney General William Barr of committing a crime by lying to Congress. “We saw [Barr] commit a crime when he answered your question,” Pelosi told Rep. Charlie Crist (D-Fla.) during a private caucus meeting Thursday morning, according to two sources present for the gathering.

Pelosi’s comment was an apparent reference to Barr’s response to Crist last month during a House Appropriations Committee hearing, during which the attorney general said he was not aware of any concerns that special counsel Robert Mueller’s team might have expressed about his four-page summary of Mueller’s findings.

Attorney General Barr’s decision to mislead the public in his testimony to Congress was not a technicality — it was a crime.

Nancy Pelosi: “[Barr] lied to Congress. If anybody else did that, it would be considered a crime. Nobody is above the law. Not the President of the United States and not the attorney general.”
Via CBS pic.twitter.com/uJN6hUgpwY