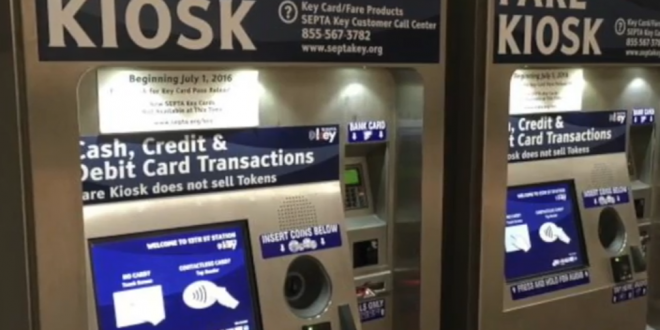 Pennsylvania’s SETPA mass transit system has begun a pilot program in which commuters must watch a video ad before loading their fare card at train station kiosks. Philadelphia Magazine weighs in:

On the one hand, SEPTA’s facing a potentially catastrophic risk to its budget, on account of the Pennsylvania Turnpike, one of its biggest funders, being billions of dollars in debt. SEPTA made $14.5 million in advertising revenue in the last fiscal year, which is pennies compared to its billion-dollar budget. A couple of extra bucks in the coffers from ad revenue wouldn’t be the worst thing in the world, would it?

And then there’s the ethical component: It’s such a blatant use of captive audience marketing. Sure, every one of us as consumers probably knows how much we are directly and indirectly exploited in the name of advertising. But the best advertising techniques at least have the tact to allow us the pretense of thinking we have autonomy. The SEPTA fare kiosk strategy is far more blunt: You want to take SEPTA? You must watch this ad first.

Here to report that you now have to click through ADVERTISEMENTS before you can purchase SEPTA Key fare at least at the kiosk at Walnut-Locust. Yes, I missed my train. Yes, I’m mad.

Sorry to hear that you missed your train. We appreciate the feedback. ^KG

SEPTA managed to replace an antiquated token system with an inexplicably worse system of cards and throw away paper tickets and now they’re making people in line watch ads before even that happens. High school kids could have developed a better system. https://t.co/kObqiHnTPp

SEPTA is piloting advertisements at its fare kiosks — so riders now have to click through commercials before reloading their Key cards https://t.co/9QRz1ytrMu

Previous Newt Gingrich: The NYT Report Is Just Vindication For Trump’s Tax Cuts, There’s Less Reason To Create Losses
Next Trump Taunts China As US To Hike Tariffs To 25%