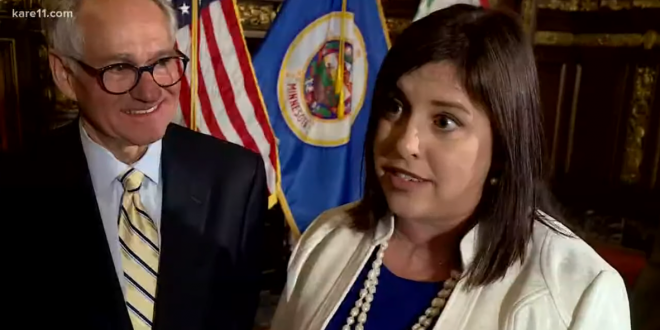 Minnesota Governor Tim Walz on Thursday signed a law that repeals the state’s marital rape exception, which protected rapists against prosecution if they lived and had an ongoing sexual relationship with the victim.

Walz, a Democrat, signed the bill in St. Paul, saying that the “reprehensible exception should never have been part of our criminal statutes.”

The legislation was approved 132-0 by lawmakers in the state house and in the state senate by a 66-0 vote earlier this week. A wave of marital rape laws were passed in the 1980s and 90s, making it a crime in all 50 states, but loopholes still existed in several states.

Jenny Teeson [photo] has spent months telling legislators the story of how she was drugged and sexually assaulted by her then-husband. But under state law, he could not be prosecuted for third-degree criminal sexual conduct.

Her story prompted bipartisan action by lawmakers. Said Walz, “No longer will this antiquated and shameful law be on our books.” Teeson watched over Walz’s shoulder as he signed the repeal measure, which she said would give others the justice she was not able to get herself.