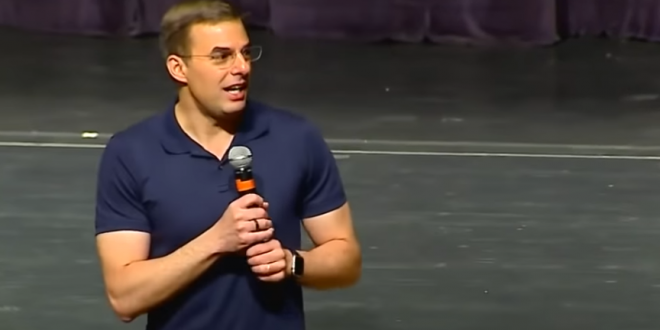 The only Republican in Congress to accuse President Trump of impeachable conduct faced voters in his Michigan district Tuesday, receiving a standing ovation from many who saluted his “courage” while sparring with some former supporters who faulted him for embracing a Democratic “smear attack” against Mr. Trump.

During a two hour event that was originally scheduled to last one hour, fifth-term Rep. Justin Amash fielded more than two-dozen questions from an estimated crowd of 900 that packed a high school auditorium in Grand Rapids.

He said those who read special counsel Robert Mueller’s report on Mr. Trump’s conduct during and after the 2016 presidential election will be “appalled,” and said Democratic House Speaker Nancy Pelosi is trying to hold the majority in the House of Representatives rather than upholding the law.

In the first video below, a lone MAGA hat woman battles the audience when she gets booed while trying to ask a question.

The crowd erupts into a standing ovation after a man tells Amash he “Salutes him for his courage”.@wwmtnews pic.twitter.com/25mbw98ZM4

Justin Amash says Pelosi wants it both ways on impeachment, resisting for fear of losing Democrats in tougher districts. He says she’s wrong and that Congress has a duty “to uphold the law, to prevent government abuse” regardless of politics. Again, crowd applauds.

Previous Trump Campaign Sponsors Laura Ingraham’s Podcast
Next Trump And Junior Tell Roy Moore Not To Run: Call It Off Now If You “Care About MAGA More Than Your Ego”