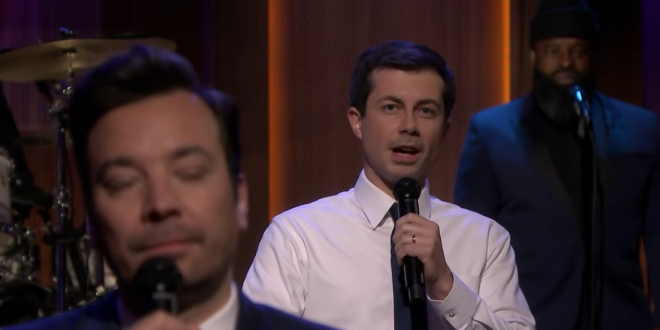 Last month, the hosts of Fox & Friends openly worried that Mayor Pete Buttigieg might be the next Barack Obama. Now, Jimmy Fallon may have just confirmed their worst nightmare. On Monday night, Buttigieg joined the Tonight Show host for his latest edition of “Slow Jam the News.”

The recurring bit started as a vehicle for former NBC News anchor Brian Williams and has featured cameos from the likes of Chris Christie and Mitt Romney. But by far the most memorable versions of the musical sketch came in 2012 and then again in 2016 with President Obama joining Fallon and The Roots.

The slow-jam was mostly Buttigieg making earnest campaign introductions, Fallon rephrasing them in a low voice with double entendres, and Tariq Trotter of The Roots singing most of the good one-liners, but they shook things up a bit at times, like when Buttigieg said he went on Fox News because he wants “everyone to join this campaign, Democrats and Republicans.” “Democrats and Republicans? So what you’re saying is you go both ways?” Fallon asked. “No, I’m just gay,” Buttigieg responded.

“Ever since he declared his candidacy, America’s been all hot and bothered for him.” https://t.co/DAWiZbpuW1