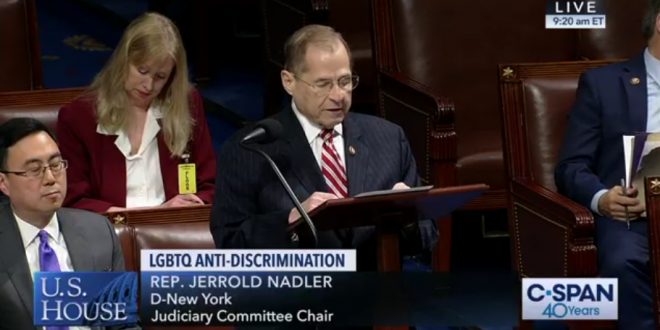 “Today is a historic day—the first time a comprehensive LGBTQ civil rights bill has come to the floor of the House. This long overdue legislation will provide millions of LGBTQ Americans protections from being denied medical care, fired from their jobs, or thrown out of their homes simply because of who they are.

“At this moment, we have an opportunity to continue our march toward justice—to enshrine in our nation’s laws protections for marginalized communities to ensure that everyone can fully participate in key areas of life, and to provide them recourse in the face of discrimination.

The debate has already begun and at this writing a GOP rep is ranting as you’d expect. Watch live on C-SPAN or at this link or at the embedded clip below.

History is being made this morning on the floor of the U.S. House, where the first bill providing for comprehensive non-discrimination protections for LGBTQ people is expected to pass. Tune-in live to the floor debate on @cspan.#EqualityAct