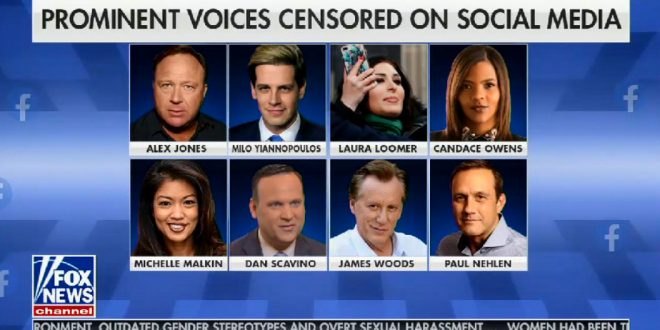 Fox News host Laura Ingraham on Thursday sympathetically portrayed notorious white supremacist Paul Nehlen as a “prominent voice” who has fallen victim to censorship for his beliefs on “border enforcement.”

Noting that Facebook has said it will monitor hate on its platform, Ingraham displayed an image of right-wing figures who have recently been banned or suspended from various social media platforms. The caption read: “Prominent Voices Censored On Social Media”

Nehlen unsuccessfully challenged the then House Speaker Paul Ryan in a 2016 Wisconsin Republican primary and again in 2018 against Representative Bryan Steil before the party banned him for his extreme views.

The 50-year-old is banned from Twitter for racism, Facebook for spreading hate, and Gab, a network popular with the far-right, for doxxing another user. Doxxing is the compilation and then public release of an individual’s personal information to encourage harassment.

Nehlen, who compared the mixed-race actress Meghan Markle to a primitive human, and who has said “Jews control the media,” was on the list displayed by Ingraham.

This is really stunning, even for Fox. Nehlen is an open white supremacist who uses racial and anti-Semitic slurs. Ingraham describes him and others in this clip as “people who believe in border enforcement, people who believe in national sovereignty.” https://t.co/8HoAKpGAzn

Here’s more on Paul Nehlen, who’s so extreme that Steve Bannon and Breitbart disowned him years ago. He’s even been kicked off of Gab! And now Laura Ingraham is positioning him as just another conservative victim of social media bias. https://t.co/sPcuc0fVu9

Previous GOP Sen. Chuck Grassley Blasts Trump’s Mexico Tariffs
Next Philippines President: I Was Gay But I Cured Myself