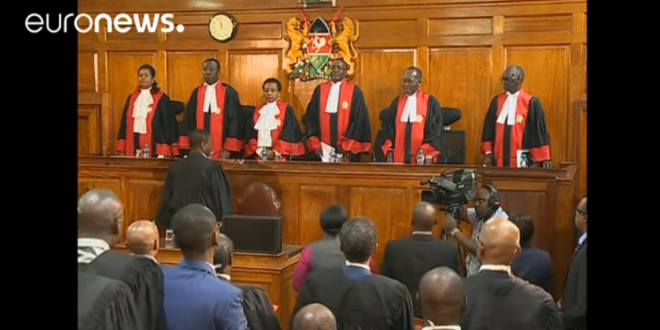 Kenya’s High Court on Friday upheld laws that criminalize gay sex, declining to join the handful of former British possessions that have recently abolished a prohibition imposed by Britain during the colonial era.

The unanimous ruling by a three-judge panel of the court, announced in a courtroom packed with activists who wanted to see the laws overturned, keeps Kenya aligned with most of Africa.

Across the continent, anti-gay laws and conservative cultural mores remain prevalent, and in addition to the threat of prosecution, discrimination and violence against lesbian, gay, bisexual and transgender people are common.

UPDATE: Just in from Outright International.

The case challenging this law was initiated in Nairobi by the National Gay and Lesbian Human Rights Commission, the Gay and Lesbian Coalition of Kenya (GALCK), and the Nyanza, Rift Valley and Western Kenya Network (NYARWEK). Together with other partners, they argued that the laws stand in breach of the assurance of protection from discrimination and the right to human dignity and privacy for all prescribed in the country’s constitution.

In a ruling that lasted almost two hours and quoted both international case law and national provisions protecting the family, culture and religion, Justice Aburili, Justice Mativo and Justice Mwita stated that the contested provisions do not target a specific group of people, but rather “any person”, and therefore cannot be considered discriminatory. Furthermore, the judges argued that Sections 162 and Sections 165 do not violate the right to dignity or privacy of LGBTIQ individuals.

Ultimately the petition to declare these colonial-era laws unconstitutional was dismissed on the grounds that “decriminalizing same-sex sex would contradict the provisions of article 45 sub-article 2”, which defines marriage as between persons of the opposite sex and “would indirectly open the door to same-sex unions” which “would be against values of the constitution”.

Kenya’s High Court upheld a law that criminalizes gay sex and punishes it with up to 14 years in jail. It is one of 40+ countries that inherited British colonial anti-gay laws. pic.twitter.com/CO9Bf6MwPr

More than 70 countries criminalize gay sex, most of them Muslim countries or former British colonies, according to advocacy groups https://t.co/sT8qnXmH3C

The High Court on Friday declined to decriminalise sections of the Penal Code that make it illegal to have consensual same sex in Kenya.#primenews
https://t.co/lQ0SPBpWQb